Covid was an opponent our girls tennis team couldn’t beat. This year’s season started out strong and healthy. Players came to the courts ready to play. Unfortunately, a little bit into our season, our varsity team lost to covid, quarantining half of their team.

JV player, Leksy Hanen, who had played up on varsity said, “It was not worth the whole $50.” Other players agreed with Leksy. Jordan Boudreau and Alexis Gettelman both stated, “Incredibly unorganized and a little traumatic. Continuing on they also said “I was forced to play with people I didn’t want to and play a position I wasn’t good at or didn’t want to play.” A lot of the girls this season believed it was unorganized, and I agree. Practices were not known in advance and games were told to us the day of. The teams were not established until later causing confusion to a lot of the players. Kira Vukovich, who was asked to play up for varsity had more of a positive way to describe the season, “It was confusing in 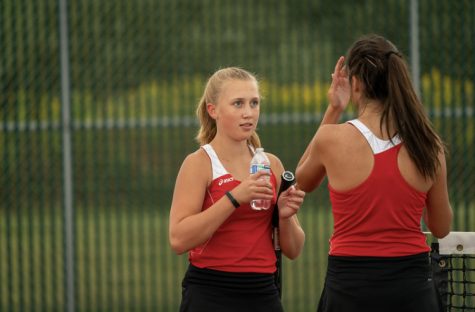 the start, but turned out in the end and was an overall fun season.” She also adds on by saying, “Covid made everything a little on the fence but getting to play was worth it and I feel like we had to be a little positive.” Lastly, Brenna Skelton, new player of tennis said, “Season ended before we got spirit wear. It was a fun season, but it was stressful because it was poorly organized.” Overall, this year’s tennis season was stressful, but it was a great experience that we still got to play.

JV players had to step up and fill the spots of the missing players. Sadly, not long after our JV 1 team lost to covid as well, quarantining some students and players. I thought the season went pretty good, it was fun to just be able to play, but it really was stressful due to our new circumstances . I would like to finish off by saying it was a good season and sadly my season ended a little earlier, due to being quarantined because of close contact, the season was fun and I got closer with a lot of the new players and older players.